30 years ago today, on August 11, 1991, The Ren & Stimpy Show premiered on Nickelodeon.  It was one of the three original "Nicktoons," along with the shows Rugrats and Doug.  I have been a fan of the show since I was in my tweens.  My first exposure to the cartoon was the "Kilted Yaksmen Anthem," the lyrics to which I can still recite by heart nearly 30 years later.

John Kricfalusi, the show's creator -- along with his animation studio Spumco -- was fired from the show in 1992 among missed production deadlines and controversy about the show's content.  The show was then taken over by Games Animation, Nickelodeon's in-house animation studio.  To be honest, I prefer the Spumco episodes over the later ones.  To me, there is just something that is lacking in the Games shows.

I do have some Ren & Stimpy collectibles in my room. 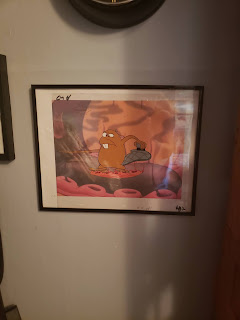 One of my favorite material possessions -- though not my first one!  An original cel of the Tooth Beaver from "Ren's Toothache," my all-time favorite Ren & Stimpy episode. 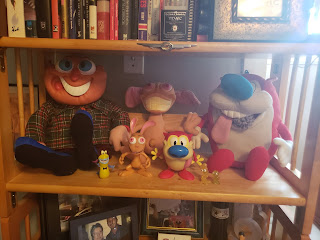 Dolls and figurines.  Here we have George Liquor (AMERICAN!), who figured most prominently in the banned episode "Man's Best Friend," along with talking Ren and Stimpy dolls from 1992 (which still work).  In front there are Ren and Stimpy figurines with Muddy Mudskipper ("ya lousy bum!") and Stimpy's "magic nose goblins."
Happy happy, joy joy!
ren and stimpy 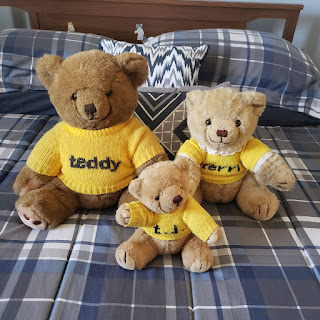 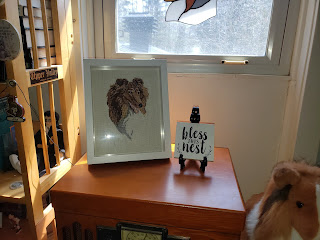